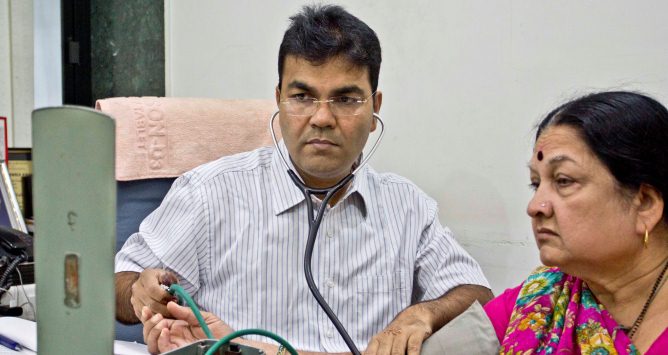 Dr. Banshi Saboo is an experienced Physician specialising in Diabetes. He began private practice at Ahmedabad in 1998 at "Dia Care - Diabetes Care & Hormone Clinic", which has over the years expanded into an advanced Diabetes care centre, with research facilities as well. Dr. Saboo is also attached to many multispeciality hospitals in Ahmedabad as a Consultant Diabetologist. Simultaneously, he is doing a PhD at Gujarat University on "Phenotyping and Genotyping of Young Diabetics in the Indian Population".

Dr. Banshi Saboo is a member of a large number of medical associations, and is actively involved in several of them as a committee member and/or in an executive or governing role. He has been on the organising committee of many conferences in Ahmedabad and the rest of Gujarat state. He has also presented innumerable papers at conferences in India and abroad.

Dia Care is well equipped to conduct research studies and collect data for clinical trials, and Dr. Saboo himself has conducted various clinical trials as a capacity of Principal Investigator or Co-Investigator. The centre is also recognised by RSSDI for conducting a Certificate Course in Diabetes and Dr. Saboo actively involves himself in teaching undergraduate and postgraduate medical students.